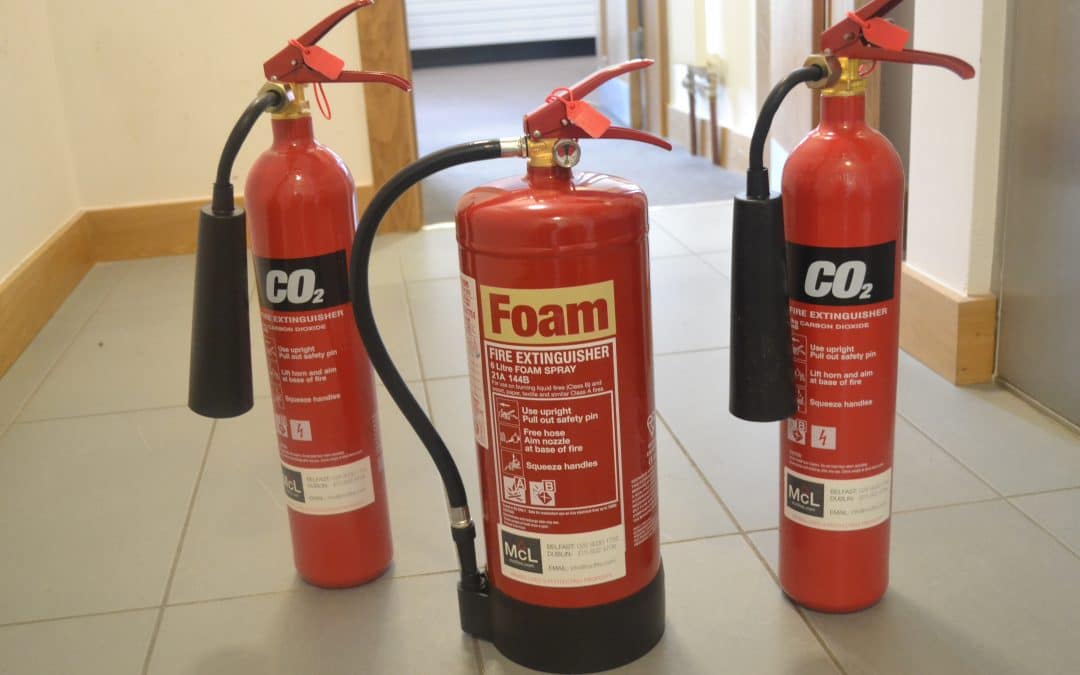 CO2 (Carbon Dioxide) .Co2s are primarily recommended for use on electrical equipment, often installed over the messier powder extinguisher’. This is due to the fact that the CO2 gas itself is not conductive. After use CO2’s tends to be considered a ‘cleaner’ fire extinguisher as they leave no real trace of being discharged, unlike other extinguishers that may leave water, foam or powder residue. CO2 Extinguishers are also effective at extinguishing Class B fires (Fires that involve flammable liquids).

Like most extinguishers in the UK, a CO2’s is “90% red and 10% colour” to comply with BS EN3 certifications, however some are chrome with a black strip to give a more distinctive/high quality look. They are distinguished by the black coloured stripe on the top and front. Instructions are also printed on the side, however unlike other extinguishers CO2’s have a ‘Discharge Horn’ rather than a ‘Hose’. This horn allows the CO2 to safely discharge and displace its enormous pressure to effectively extinguish fires.

CO2’s most common sizes are 5KG and 2KG (As seen in the image), however some larger sizes are available such as 45kg wheeled units. These larger units ten to be used on fishing vessels or in airports.

How do Carbon Dioxide Extinguishers Work?

Carbon dioxide gas is store in CO2 extinguishers at such high pressures (up to 55 bar) that the gas becomes a liquid. When discharging a CO2 Extinguisher this pressure is released and the liquid expands back into a gas whilst cooling rapidly. This process is so vigorous that it can cause ice to build up on the horn. If you were to hold a conventional CO2 horn whilst discharging it, this could lead to serious frost burns. The most effective range when using a CO2 is between 1m and 3m from the fire itself. CO2 Fire Extinguishers are predominantly made from extremely thick aluminium or steel with brass heads. The steel extinguishers tend to be a more cost effective solution as the material is cheaper and the cylinders are easy to manufacture. However, the cheaper steel is much heavier and some people may struggle to lift and use the larger 5KG CO2 Extinguishers.

How do they extinguish a fire?

CO2 Fire extinguishers are the safest fire extinguisher to use with live electrical fires. As CO2 is a gas it is dry, inert and leaves behind no residue that may damage or interfere with electrical equipment. This is why CO2 Fire Extinguishers are often found next to electrical equipment (computers, switch rooms, lift plant rooms)In most scenarios, such as in an office, a CO2 will be found alongside a Water or a Foam as a ‘fire point’. This allows for a broader range of coverage across the classes of fire. CO2 Fire Extinguishers can also be effective of Class B fires (Flammable Liquids)