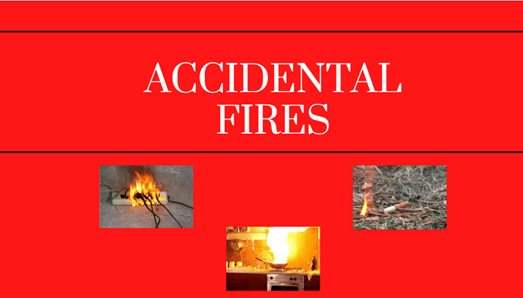 When trying to determine the type of fire that has occurred, a specific name would be given to it. The type of fire it is would be determined by the where, the how and the harm. The fires which are seen to be harmful and more serious are described as primary fires. This would include dwelling fires, other building fires, road vehicles fires and other outdoor fires. Secondary fires are generally smaller fires that don’t involve people or property. This type of fire includes the likes of a refuse fire, grassland fire and a fire in derelict buildings and vehicles. Other types of fires include Chimney fires, Deliberate fires, Late fire calls and accidental fires.

Within this blog there will be a specific focus on accidental fires explaining what they are, causes and how they affected Northern Ireland in the past year. An Accidental fire can be determined by the motive, whether the fire was presumed to be either accidental, not known or unspecified.

The Reality of Accidental Fires

Accidental fire is one of the most common types of fires in Northern Ireland. This can be evidenced by a report done in October 2022 that states that in the past year the Northern Ireland fire and rescue service dealt with 714 accidental house fires. The top 3 causes being cooking appliances at 246 instances, 128 electrical equipment instances and 44 smoking related instances.

This involves cooking related appliances such as cookers, ovens, microwaves and toasters etc. With cooking appliances, the reason, we get so many accidental fires is through the emission of heat. These fires can be avoided by having the hobs and oven turned off when the cooking process is complete and having no flammable material near hot appliances. Whether you are cooking for yourself or others, be careful and mindful of these suggestions to avoid any potential fires in the future.

Throughout 2022 Northern Irish homes, businesses and landscape suffered hardship and loss through fires whether accidental or deliberate. They have caused some damage in some sort of format. Below is some examples of accidental fires that happened throughout the year, specifically in January, February and December.

In January of last year, Northern Ireland probably suffered its biggest fire of the last calendar year. It wasn’t necessarily a big fire, but it occurred in one of Belfast’s biggest and most well-known hotels. The hotel in question is the Europa hotel. The small fire occurred on the 11th floor of the Europa hotel in a bedroom. The fire was being treated as an accidental fire, which was believed to be caused by an electrical component of some sort. The quick actions of the staff and firefighters meant that only one room was damaged and no one was injured. With the cause of the fire being of an electrical nature. It would suggest that the fire could have been caused by anything from overloaded plug sockets to fried wires and faulty equipment.

In February, a fire occured in popular farm shop known as Ashvale Farm Shop in Lisburn . The fire occurred within a storeroom of the Ashvale Farm Shop, which is located on the old Ballynahinch Road. Like the Europa hotel fire listed previously this fire is believed to be of the accidental nature. However, the after affects appeared to be much worse as the premises were badly damaged. With this fire happening in the early hours of the morning thankfully no one was hurt.

For many people in Northern Ireland December time of year is full of celebration. However, for some this wasn’t the case. As three separate accidental house fires in the space of a 72-hour period led to the deaths of three men. This lead to the Northern Ireland Fire & Rescue service asking everyone to take more priority with fire safety. The winter period is high-risk for accidental house fires and especially now with people trying to find ways to combat the cost of living.

To summarise this year has had its up and downs, but one thing is clear. To prevent the multitude of accidental fires. More care should be taken with any and all electrical and cooking appliances. Especially if people start to seek ways in which to combat the recent cost of living crisis.

Thanks for reading, if you have any queries, please be sure to contact on by phone 028 9521 9361 or by email info@mclfire.com. If not be sure to check are socials on Facebook and LinkedIn.